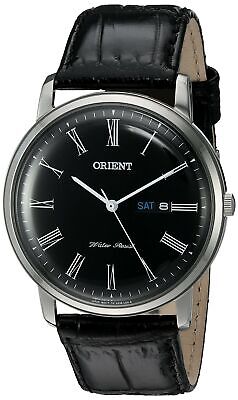 With its roots dating back to 1901, Orient Watch has specialized in the
manufacture and growth of mechanical timepieces. Since 1950, Orient has been
at the forefront of the production of mechanical watches in Japan. When it
comes to watchmaking, Orient does not have an obscure history: Orient has been
producing mechanical watches for more than 60 years. It is one of the top
three watch manufacturers from Japan and produces 2 million watches per year.
Frankly, it may be the biggest watch brand you’ve never heard of. All of
Orient’s movements are exclusively made in Japan and no iteration in
manufacturing is outsourced. The implicit value of possessing an Orient watch
is that the only way to enjoy its tremendous quality is through ownership.
Orient prides itself on the premise that its timepieces are a “watchmaker’s
watch”-- a no frills mechanical watch that is robust and trustworthy. Our
online reputation suggests that an Orient watch is reliable out of the box.
This can be attributed to Orient’s undying dedication to mechanical watches.
In the eye of the Quartz Revolution in the 1970s, the other top Japanese
brands went on to predominantly manufacture quartz, while Orient remained
focused on its mechanical movements. And while Orient does produce quartz
watches, all movements are supplied by its parent company. So what’s the
difference between quartz and mechanical? Despite the obvious difference in
moving parts, the short answer is seen in the smooth sweeping second hand of a
mechanical watch versus the choppy tick of a quartz movement. As an in-house
movement producer, Orient joins a short list of watch companies that actually
manufacture their movements in-house and exclusively for their own use. In the
industry, it is highly uncommon that a company produces their own movements
in-house, and by doing so Orient Watch can ensure that the quality of their
wristwatches are held to the highest standards— Orient’s watches have often
been lauded for their rich styling, dependability, and tremendous value. The
Capital Version 2 is a fresh take on the original Capital model, while keeping
in line with the classic motif of the overall collection. Instead of bar index
hour markers, the version 2 prominently features thin Roman Numerals around
the outer edge, in addition to its domed crystal and thin profile.

New with tags We have been selling on eBay for more than 10 years. Check our feedback with over 12,000 positive reviews. ...

New with tags We have been selling on eBay for more than 10 years. Check our feedback with over 12,000 positive reviews. ...